Click HERE  to watch or listen to this Lunchtime Conversation 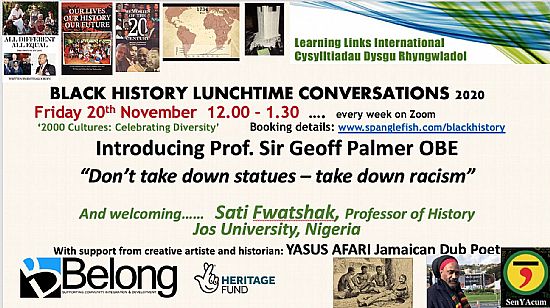 .... this week we have Jamaican Prof Sir Geoff Palmer (See more about Geoff Palmer here) who has been a campaigner for many years in Scotland to get the stories of Scotland’s role in the Slave Trade in conversation with Jamaican poet Yasus Afari.

We also welcome Sati Fwatshak, Professor of History, from the University of Jos, in Nigeria, who will be speaking about his current work.

12 11 2020  Edinburg Evening News:  "Scotland’s first black professor Sir Geoff Palmer has been appointed lead a review of Edinburgh’s statues and street names which commemorate those with close links to slavery.

The city council announced Sir Geoff, who is a leading human rights activist, would chair the Edinburgh Slavery and Colonialism Legacy Review Group, which is due to meet for the first time before the end of the year.

The move comes in the wake of protests over the Melville monument in St Andrew Square, which commemorates 18th century Home Secretary Henry Dundas, 1st Viscount Melville, who is seen as responsible for delaying the abolition of slavery in Britain by 15 years from 1772 to 1807."

And the Alex Salmon programme that focusses on Sir Geoff Palmers life.