See the programme for this session HERE

The focus will be on the European exploration of Africa, with a presentation about the recent research done by Belong Nottingham to find out more about David Livingsone and the Africans who assisted him, and also there will be a discussion about Henry Morton Stanley's role in the 'Scramble for Africa'. 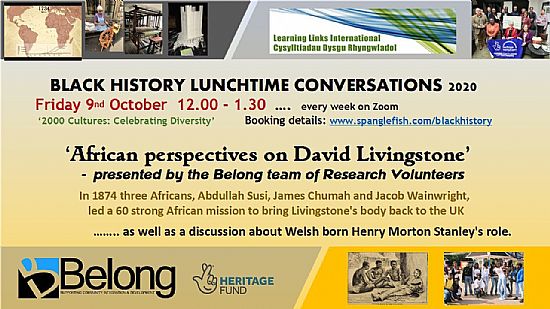 To link with the film shown by Belong Nottingham Click HERE

In 1864-65 the Victorian explorer, missionary and anti-slavery campaigner David Livingstone visited Newstead Abbey to write a book and spend time with friends and family, before returning to Africa on his journey to seek the source of the Nile, a journey from which he never returned alive; his wife Mary Moffatt had died in Africa during his previous expedition.

In 1874, three Africans, previously companions of David Livingstone and travellers in their own right – Abdullah Susi, James Chumah and Jacob Wainwright, led a 60 strong African mission to bring Livingstone's body back to the UK also visited Newstead Abbey, Nottingham, to help tell his story and their own.

'Belong' worked with a group of volunteers in 2019-2020 to explore these stories and their relevance to today's world, and to bring to life the fascinating but neglected story of these African visitors to Nottingham in the 19th Century.

"David Livingstone is a famous British Explorer and Missionary whose work undertaken particularly in Africa is well documented. Indeed there exists Societies dedicated to his memory.

An aspect of his legacy is the lasting impact that he left for the people and the continent of Africa. Many in parts of Africa have utmost respect for the time and bond he gave to the continent.

The black African Community in Nottingham has to date low level of engagement with heritage projects. A scoping exercise has identified that by storytelling of Livingstone’s legacy, this will encourage enthusiasm to relieve his tales but crucially and more importantly to uncover the heritage from African perspective and the impact and influence that the African culture has had overtime to the British Society. All relieved through the journeys and experiences of David Livingstone."